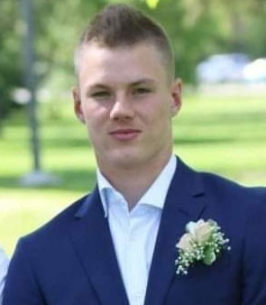 With broken hearts and profound sadness, we announce the sudden and unexpected passing of a son, grandson, nephew, cousin, great-nephew and close friend, Connor Byerley.

Connor’s love of all sports gave him an association with many teams. He enjoyed the outdoors as well, including fishing in Geraldton with his uncles and hunting. He got to be part of the ‘older guys’ men’s league for basketball and baseball and got to play with and against many players, including his dad – sharing the experience that sports welcomed. He was very competitive and always gave his all for the team and the game. Connor loved his teammates and all that being a team player contributed to every game. His sports jerseys, memorabilia, awards and achievements adorn his room. He was most proud of his SSSAA football ring won his senior year at Churchill HS.

Connor was a young man with a big heart, responding to everyone he met with his humorous personality. Anyone who knew him, knows that he was a kind and sensitive person. We were very blessed to have had Connor fill our lives with many cherished happy memories and events. Family and friends were so important to him.

Connor was predeceased by his great-grandparents, Herb and Vi Byerley, and Mike and Mary Wasylkiw, and by his good friend Nathan.

Connor is survived and held closely in the hearts of his father Jason (Laine + Cooper and Cadyn), his Nana Sheryn, Grandpa Jack (Susan), Uncle Jeffrey (Vicki) and cousins Ashley, Kayla and Taylor, along with numerous great aunts, uncles and cousins, and of course “The Boys”. He was also dearly loved by his “extended family” from both here and across the border.

Connor’s passing has left us with huge holes in our hearts, but the support and generosity of everyone who gave to the Connor Byerley Legacy Scholarship has helped so much with our healing. This scholarship will be an annual award that will be given to an outgoing, athletic high school student. Further donations can still be made to the Connor Byerley Legacy Scholarship at the Lakehead Public School Board (Financial Department).

There will be a visitation in honour of Connor on Tuesday February 22, 2022 from 6:00-8:00 pm at the Sargent and Son Funeral Chapel, 21 North Court St. Online condolences may be made at www.sargentandson.com.