To share your memory on the wall of Dr. John Derek Wyant, sign in using one of the following options:

Provide comfort for the family by sending flowers or planting a tree in memory of Dr. John Derek Wyant

Provide comfort for the family by sending flowers or planting a tree in memory of Dr. John Derek Wyant

Derek became one of the more popular and “much loved” doctors in the community. His sense of humour, whistling as he walked down the halls and his love of suspenders (his collection has now grown to a significant size) were well known traits. Few surgeons would ever be seen roaming the hospital halls with bright orange “Husqvarna” suspenders, baggy pants, pastel polo shirts and a Breukleman Potato Farm baseball cap. It did not bother him one bit. All of these traits combined with a bedside manner that would put the most nervous patients at ease made him one very memorable man. Derek was honoured by the Ontario Medical Association in 2009 when he received the Glenn Sawyer Service award in recognition of significant service to the Ontario Medical Association and the medical profession. Then in January 2019 Derek was recognized by the Thunder Bay Regional Health Sciences Centre for 50 years of service.

Derek had one love in his life, Anne. They met as neighbours when he was 15 and she was 13 and eventually married in 1962. They were together for 67 years, married for 58 of those years and never apart until his passing.
In 1973, Derek began his life long journey into the world of horses – rekindling childhood memories living in South Africa and England. He shared this passion with his three children and grandchildren, spending his spare time running out to the barn to ride the horses, travelling to horse shows near and far, creating beautiful memories and lifelong friendships.
Derek bought his camp at East Arrow Lake in 1987 and spent the next 30 years rebuilding it into his playground. Known to many as “Popeye’s Playhouse”, his workshop houses every possible tool. Classical music greeted you as if it was a live concert, and you name it - he could build it! Many enjoyable years have been spent at the family camp which will be treasured by family and friends forever.

Derek was predeceased by his parents, Gerald and Margaret Wyant, infant brother, Peter (at birth), his mother-in law and father-in-law, Melba and Harry Bell, and sister-in-law, Maureen Leiva-Wyant.

Cremation has taken place and a private service will take place early in the New Year when circumstances permit. In lieu of flowers donations may be made to St. Joseph’s Foundation of Thunder Bay, Thunder Bay Health Sciences Centre Foundation, or a local charity of your choice.
Read Less

There are no events scheduled. You can still show your support by sending flowers directly to the family, or planting a memorial tree in memory of Dr. John Derek Wyant.
Plant a Tree

We encourage you to share your most beloved memories of Dr. John Derek here, so that the family and other loved ones can always see it. You can upload cherished photographs, or share your favorite stories, and can even comment on those shared by others.

Posted Jan 08, 2021 at 08:07pm
Hello Peter and Family - just heard about your father's passing. So very sad to hear. He was always so good to my parents. My thoughts are with you. Cheryl Rossetti
Comment Share
Share via:
MK

Posted Jan 08, 2021 at 10:38am
As a nurse, Manager, Director, at The Port Arthur General and TBRHSC I knew Dr. Wyant very well. We enjoyed working together clinically and administratively. He was always there for his patients and the staff. A ray of sunshine, he brightened everyones' day. Always enjoyed running into him after I retired. Truly one of the best!

Posted Jan 05, 2021 at 05:05pm
When I was a young girl I contracted a bone disease and Dr. Wyant was my doctor. He was a most delightful, caring doctor. During my weeks in isolation, he would entertain me with puppets and music. Once out of isolation and surgery, my mother would often find Dr. Wyant carrying me throughout the corridors of the hospital singing as we bee bopped along. While applying my many plaster casts, Dr. Wyant would sing “Margaret Ann” to the tune of “Barbara Anne” by the Beach Boys. What a fun memory it brings when I hear the song on the radio today. Dr. Wyant’s heart and kindness healed many a tears. He was a treasure . . . and will be truly missed.
Comment Share
Share via:
BH

Posted Jan 05, 2021 at 10:32am
As a nurse on the surgical floor at PAGH, I worked with Dr, Wyant for a couple of decades, and always found him to be friendly, funny and caring. The nurses loved him! He didn't yell or scold, if you made a mistake he'd just say "Well let's see what we can do about that." I will always think of him with a smile. He will be missed
Comment Share
Share via: 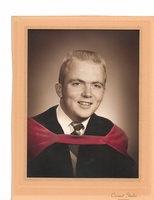