To share your memory on the wall of Earl Bernst, sign in using one of the following options:

Provide comfort for the family of Earl Bernst with a meaningful gesture of sympathy.

We encourage you to share your most beloved memories of Earl here, so that the family and other loved ones can always see it. You can upload cherished photographs, or share your favorite stories, and can even comment on those shared by others.

Marie Claude and Charles. and The Chorney's have sent flowers to the family of Earl Emil Bernst.
Show you care by sending flowers

Posted Nov 17, 2019 at 10:27am
Fond memories at Shebandowan playing horseshoes with my partner Earl against Doug and his uncle.
Lots of laughs a few beers and great company.
Rest In Peace Mr. B.
As always an awesome guy.
JC
Comment Share
Share via:
PT

Posted Nov 17, 2019 at 10:27am
Fond memories at Shebandowan playing horseshoes with my partner Earl against Doug and his uncle.
Lots of laughs a few beers and great company.
Rest In Peace Mr. B.
As always an awesome guy.
JC
Comment Share
Share via:
JC

Posted Nov 16, 2019 at 01:59pm
My best memories were in the summers of my early years some 50 years ago at Shebandowan. Hitchhiking at 10 years of age from lower shebandowan to Earl’s camp a short ways up the lake to meet up with Doug for a day of waterskiing and whatever else we dreamed up. This tradition continued for years. With open arms Florence and Earl would invite me in for lunch and supper and a day of skiing and always a smile on his face. These were truly some of my best childhood memories. Earl loved his family and was always available to take the boys waterskiing no matter what was on his plate for work.
The last I ventured by boat towards his camp, my boat broke down and I paddled to his camp . Earl was hosting a big party and I was reluctant to come in as I waited on the deck deciding if I would bother them and Earl saw me and was quick to invite me in and introduce me to everyone and make sure I was once again fed and of course hydrated (lol) ,and arranged to get me home that evening. 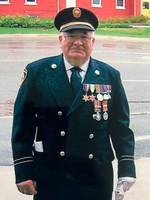