To share your memory on the wall of Elsie Koivisto, sign in using one of the following options:

Provide comfort for the family by sending flowers or planting a tree in memory of Elsie Koivisto.

Provide comfort for the family of Elsie Koivisto with a meaningful gesture of sympathy.

After 105 ½ years, we say goodbye to our Mother, Grandmother, and Great Grandmother (Gigi). Elsie Jean Koivisto (Skinner) was born on July 26, 1915 during WW1 to parents Josiah and Mary (Bond) Skinner in Napinka, Manitoba. At 3 she lived through the Spanish Flu of 1918 and had to wear a mask during that time. Mom was the youngest of 4 girls and spent her younger years between Winnipeg and Ft. William where the family settled. She attended Isabella School and the Vocational High School. She met Weikko Koivisto and they were married in Ottawa by Rev. Dan McIvor. Returning to Port Arthur they settled into married life raising daughter Sandra and son Terry.

Mom worked as an Accounts Manager, retiring from Mahons Electric. From there volunteering became her new fulltime job. She acted in skits with Kandoo Players and singing and dancing in groups at 55+. The 55+ Centre became her second home where she greeted members and guests at the reception desk. Her favorite place was the library, organizing and labelling books and always had suggestions for anyone who asked for interesting reads.

In 2020 she received a Citizen of Exceptional Achievement 50th Anniversary Volunteer Award celebrating volunteers for 50 years of volunteering service.

Mom saw and lived many firsts in her lifetime. She had an amazing mind and memory. She loved people and volunteering, but her greatest love was her family. Her great grandchildren brought her such joy.

We are so grateful that mom lived independently in her little house that she loved until just three weeks ago. She was feisty, outspoken, but the kindest, most loyal mother, grandmother and great grandmother. (GiGi) We will all miss her but we are left with the most cherished memories of her incredible 105 ½ years. Thank you, Sargent’s, for your kind & professional assistance. Online condolences may be made at www.sargentandson.com.

Receive notifications about information and event scheduling for Elsie 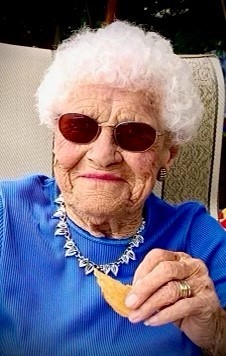 We encourage you to share any memorable photos or stories about Elsie. All tributes placed on and purchased through this memorial website will remain on in perpetuity for generations.

Interlink Choir Members has honored the life of Elsie Jean Koivisto by planting a memorial tree.
Plant a Tree in Memory of Elsie
Planted in the area of greatest need
S

What a beautiful tribute to Elsie! I did not know Elsie but from reading the obituary, it appears she was a special lady to many.
Elaine Niemi

That was a lovely gesture to purchase a Memorial Tree in Elsie's Memory. She was a remarkable lady, one of the first choristers to greet me and welcome me to the choir, she was so friendly and knowledgeable. I have never forgotten her.
Nessi Pritchard

Sandra and family
I was so sorry to read of your Mom's passing. She lead a very long, busy life. I loved meeting up with her and having a lot of good conversations. She will be missed. My sincerest condolences
Comment | Share Posted Mar 28, 2021 at 01:14pm via Condolence
MP

I am sorry to read about your Mom's passing, after a very active & full life. I have many fond memories of your Mom as she greeted me at the door at 55+ and always said "Hello Mona". She would ask "Are you looking for Sandra?". She would then point me in your direction. She loved being a regular part of 55+ and was a treasured patron.
I, also remember her coming to Westgate High school to see her great grandson perform music. Sandy, your Mom lived a wonderful active life, enabled by your great care.
Mona & Rick Perkins
Comment | Share Posted Mar 24, 2021 at 06:43pm via Condolence