To share your memory on the wall of Eric Ernsting, sign in using one of the following options:

To plant a memorial tree in honor of Eric Ernsting, please visit our Heartfelt Sympathies Store.

Receive notifications about information and event scheduling for Eric

There are no events scheduled. You can still show your support by sending flowers directly to the family, or planting a memorial tree in memory of Eric Ernsting.
Plant a Tree

We encourage you to share your most beloved memories of Eric here, so that the family and other loved ones can always see it. You can upload cherished photographs, or share your favorite stories, and can even comment on those shared by others.

3 trees were planted in the memory of Eric Ernsting

Posted Apr 06, 2021 at 07:07pm
"Eric Ernsting" will remain in our hearts forever. I was so fortunate to be given the opportunity to meet Eric and spend some time with him!

3 trees were planted in the memory of Eric Ernsting

My thoughts and prayers go out to sherry and andrew and erics family. I am so sorry for your loss. Alot of great times with eric and the family. He will be missed by all.
SD

Posted Apr 16, 2021 at 05:41pm
We are so incredibly sad to hear about the passing of Eric. We will always remember him as a kind and caring man who always put his family first. He went to great lengths to ensure the happiness of those around him. We will always remember his goofy laugh and his happy-go-lucky outlook on life. We as a family are proud to have called him our friend.

Our hearts go out to his family during this time. You’re all in our hearts and prayers.
Sherry Almgren and Sherice Dyson

Posted Apr 10, 2021 at 11:38am
Sending my condolences and strength to Eric's family, Sherry and her family and little Andrew. My heart hurts for you all. I have such fond memories of Eric in my early years, and when I think of the memories I smile. I hope your hearts are filled with wonderful memories, and they are passed along and spoken about often.
Comment Share
Share via:
KT

Posted Apr 09, 2021 at 03:52pm
I am very saddened to hear of Eric's passing. I met Eric on his first days at Thunder Bay Hydro when he ended up on my crew. I found him to be a very caring and genuine person as well as being a very dedicated and valuable crew member. Eric's passing is a huge loss. My deepest condolences to Eric's family. Sincerely, Ken Telpuk
Comment Share
Share via: 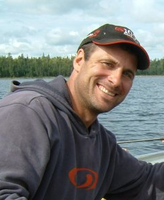