To share your memory on the wall of Genero Brescia, sign in using one of the following options:

Provide comfort for the family by sending flowers or planting a tree in memory of Genero Brescia.

Provide comfort for the family of Genero Brescia with a meaningful gesture of sympathy.

It is with heavy hearts that we announce the passing of Genero Joseph Brescia, at the age of 99. He passed away on Saturday September 12, 2020 with family by his side at St. Joseph’s Hospice.

It is with heavy hearts that we announce the passing of Genero Joseph Brescia, at the age of 99. He passed away on Saturday September 12, 2020 with family by his side at St. Joseph’s Hospice.

Joe grew up on High St. after immigrating from Italy as a young boy with his sister Helen. He played hockey in the streets of Port Arthur using “road apples” as pucks. He turned out to be quite a young athlete and excelled on the ice. He was never the “big guy”, but he was always faster. He joined the ranks of the Port Arthur Bearcats prior to World War II and was eventually recruited by the army to play for them. He raised several hockey playing kids over the years and let them all know that his shin pads were a couple of Sears Catalogues.
He met the love of his life (Peggy) while playing baseball with his army unit on the east coast of Canada during World War II. They were married for a wonderful 74 years before her passing.

He returned to Thunder Bay (Port Arthur) after the war with his new bride and he started out taking care of his family as a mechanic at Gibson Motors. He very much enjoyed his time there but couldn’t turn down the opportunity to teach automotive mechanics at his old high school (PATS or Hillcrest). He often joked that he never left there.

Joe and Peggy lived their lives in Thunder Bay. Joe, his father Vincenzo, and a group of well-wishing friends helped Joe build their family home on Rupert St where he lived until just a few short days before he passed. Joe and his father built the windows in his sister’s (Helen Baratta) garage and then carried them, one by one, on his back, up the stairs of Hillcrest Park so that he could install them in their new home. One day, when asked by a passer by why he was carrying a window up those steep steps, he replied that it was only one of many, and was a small task that needed to be done to take care of his family.

Joe taught the automotive class at Hillcrest High School for many years, and eventually retired. in his free time he designed the tech wings of Hillcrest, Lakeview, Hammarskjold, Gron Morgan, and Westgate for the school board. His tenure there was one of the best decisions he’d ever made. Here, he made lifelong friends that he and Peggy travelled the world with and spent each others’ special occasions with. Those friendships were deeply treasured, and he shared stories of times spent with such joy. He was truly looking forward to the October garden party.

Joe and Peggy decided to buy a piece of property at Dog Lake, appropriately named Joe’s Jungle. That decision led to more lifelong friendships and memories with the people of Dog Lake. Joe was the last of the original settlers and treasured his time there, wanting to know the goings on, even up to this summer where he “held court” a few times.

Joe and Peggy were greatly involved with the building of Corpus Christi Church, and both participated in fundraising events to buy the bricks and mortar which still stand to this day. They both attended mass regularly and were the original backbone of this parish. He missed not being able to participate in the last few months.
Time spent with family was so very important to Joe. His grandchildren brought him great joy over the years. From the birth of the first one to the last, he treasured each of them dearly and loved hearing from them. He enjoyed travels, gatherings, phone calls and many great visits and cookies with them. He also was there when they needed his comfort and caring, travelling across the country at a moments notice.

Joe also developed lifelong friendships with his “coffee club” members. It is these people that he met every week, that gave him a purpose. This United Nations of coffee club members brought joy and comradery to Joe’s life. The McDonalds gang discussed everything from the weather to global politics, and everyone’s opinion was heard. He loved taking his nephew Jimmy to “meet the gang” when he was in town. In his last few days, Joe was disappointed he wasn’t going to get his “free” coffee for reaching 100 years.

A private family Funeral Mass will be held on Thursday, October 8, 2020, at Corpus Christi Catholic Church on Red River Road. Interment to follow in St. Andrew’s Cemetery. Should friends desire, memorial donations to the Ronald McDonald House Charity or the charity of one’s choice would be appreciated. Arrangements entrusted to the Sargent & Son Funeral Chapel, 21 N. Court Street. On-line condolences may be made at www.sargentandson.com.

Receive notifications about information and event scheduling for Genero 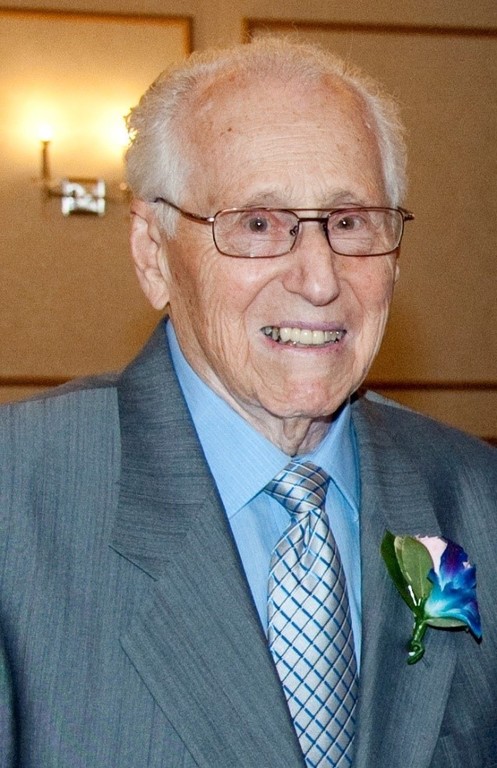 We encourage you to share any memorable photos or stories about Genero. All tributes placed on and purchased through this memorial website will remain on in perpetuity for generations.

Grant Turner has honored the life of Genero Joseph Brescia by planting a memorial tree.
Plant a Tree in Memory of Genero
Planted in the area of greatest need
KG

Mr. Brescia was my grade nine Auto Mechanics teacher at Hillcrest High School in the early nineteen seventies. One of Mr. Brescia's favourite lines was, "Is everything clear?"...We would all nod yes...at which point Mr. Brescia would add..."Yeah, clear...clear as mud." Mr. Brescia had some great line and we made it through shops class with a greater appreciation of the four-stoke cycle. In later life I would see Mr. Brescia walking, he always made time to say hello and have a chat.
Comment | Share Posted Oct 13, 2020 at 11:54am via Condolence
LG

Joe Sr. had such a great spirit and such admirable energy. We always enjoyed our conversations with him. Our thoughts are with all of the family at this time.
The Goodings
Comment | Share Posted Oct 08, 2020 at 04:18pm via Condolence
CT

Sorry to hear about your loss Rod and Joe. We hope his full and well-lived life brings you and family some consolation.

Rod and family
So sorry to hear about your father’s passing .Please accept our condolences .
Comment | Share Posted Sep 24, 2020 at 11:39pm via Condolence
GT

With thoughts of peace and courage for you,