To share your memory on the wall of Harry Wynn, sign in using one of the following options:

Provide comfort for the family by sending flowers or planting a tree in memory of Harry Wynn.

Provide comfort for the family of Harry Wynn with a meaningful gesture of sympathy.

It is with great sadness to announce the passing of Harry Wynn, age 71 on June 23, 2020 of Thunder Bay. Harry Wynn was born on March 24, 1949 in Allan Water Bridge. Living in different places throughout Canada, Harry eventually settled and called Thunder Bay home. Harry Wynn was a man of many titles from father, husband, brother, son, uncle, cousin, and friend but his most important role was being a grandfather. Harry was a great conversationalist who enjoyed the company of many people throughout the city of Thunder Bay, often leaving a memorable and loving impression with those he encountered. He lived his life to the fullest, enjoying his walks and bus rides around the city, taking in the sights and experiences it had to offer. Harry was also an avid bingo player and an extreme chicken and cheeseburger connoisseur. Harryâ€™s greatest pride was his grandchildren whom he would visit and spend quality time with. Predeceased by his wife Pauline Nowegejick-Wynn, and special friend Rhoda Kwandibens. His parents Lazareth Wynn & Jenny Wynn/Booth, as well as his siblings Allan Anderson, Edward, and Frank Wynn. His legacy lives on and is remembered through his children Barbara Ann Wynn, Kathryn Kwandibens, Robert Stanley and Roger Stanley. Along with his grandchildren Alura Wynn, Caitlyn Bird, Talon Bird, Dylan Stanley, Brandon Stanley, Blake Windego, William Stanley, Savannah Oâ€™Connor, Morgan Woods, Louanna Bouchard, and Louis Jr. Bouchard. In lieu of flowers, donations can be made to Thunder Bay Shelter House to continue Harry Wynnâ€™s tradition of ensuring everyone is cared for and has the necessities they need. Online condolences may be made at www.sargentandson.com.

Receive notifications about information and event scheduling for Harry 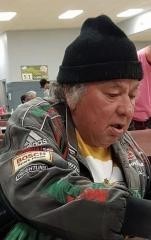 We encourage you to share any memorable photos or stories about Harry. All tributes placed on and purchased through this memorial website will remain on in perpetuity for generations.

Honor the life of Harry Wynn by planting a memorial tree.
Plant a Tree in Memory of Harry
Planted in the area of greatest need
D

It was a pleasure and a privilege to know Harry. My deepest condolences to his family, friends and acquaintances. You will truly be missed by all.
Comment | Share Posted Jul 09, 2020 at 09:15am via Condolence
TD

Harry was a wonderful man and it was always a joy to see him out and about! I don't think he ever forgot a face. Harry will be dearly missed by all. My sincerest condolences to his family. - Tessa
Comment | Share Posted Jul 04, 2020 at 10:56pm via Condolence
TL

My sincerest condolences to the entire family. Harry was a wonderful gentleman that I met over 10 years ago. He was kind, funny & generous. Harry often spoke of his grandchildren, he was very proud of them & loved them very much. He will be missed. Rest In Peace Harry.
Tiia Liigvald
Comment | Share Posted Jun 29, 2020 at 10:56am via Condolence
D

My name is Darrell Presenger. I have had the pleasure of knowing Harry for several years and have had many great uplifting conversations with Harry. Harry had a positive impact on many people. He will be missed.
Comment | Share Posted Jun 27, 2020 at 04:55pm via Condolence