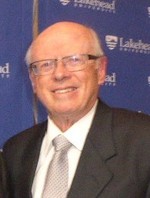 Don was born in Hamilton, Ontario and grew up in nearby Brantford. When he graduated from high school Don attended Western University where he obtained a B.A. in history. His first venture into the working world was with the Department of External Affairs in Ottawa where he worked as a Foreign Service Officer.
When it became clear that a career in the Foreign Service was not for him, Don returned to his studies in history at the University of Toronto, earning his Master’s degree in 1964. Upon graduation, Don moved to Thunder Bay where he joined the History Department at Lakehead University. He had found his life’s work as a scholar and subsequently returned to Western to complete his Ph.D. Thunder Bay beckoned again and for four more years in the early 1970s, Don worked in the History Department at Lakehead. His next career step was to the University of British Columbia in Vancouver, where he remained until his retirement in 1999.
During his Vancouver years, Don kept in touch with his Thunder Bay friends and former colleagues at the university. When he had the opportunity to take early retirement, Don returned to Thunder Bay and spent the last two decades enjoying life in his home on the shore of Lake Superior. During his retirement, Don got involved with many organizations in Thunder Bay. He served on the Boards of The Thunder Bay Sympathy Orchestra and The Art Gallery. He was president of the local branch of The Institute of International Affairs and was responsible for bringing in a roster of speakers on timely international topics.
Don had many interests beyond the academic world. He travelled widely in North America and Europe, but Finland was his favourite destination. He visited bi-annually to spent time with friends in Turku and Helsinki. He was known affectionately as a ‘Finn-wannabe.’ Music was a life-long passion of Don’s, including all genres, but his favourites were Classical and Jazz. Don appreciated good food, good wine, and, in the absence of family, the company of friends. He loved a party, was a great dancer and enjoyed entertaining. Don’s dogs were his constant companions and he walked with them daily.
Don enjoyed a fulfilling life and left a fine legacy of scholarly work. He will be missed by his many friends across Canada and Europe, but mostly by his companion, Nancy.
There will be a memorial gathering at The Courthouse Hotel on Friday, January 3rd from 4-6 pm. If friends desire, donations may be made to the Thunder Bay Symphony Orchestra or a charity of your choice. Arrangements entrusted to the Sargent & Son Funeral Chapel.