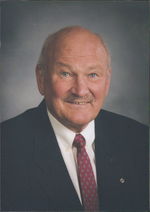 James Stasiuk, age 81 years, passed away peacefully at TBRHSC on November 22, 2019. He was born in Montreal on October 22, 1938, the only child of Peter and Dora Stasiuk. Jim grew up in LaSalle, Quebec, attended LaSalle Catholic High School and Loyola College, there receiving his certificate of Engineering Science. He taught math for 2 years at the private boy’s school Stanstead College, but determined to finish his engineering degree he went back to University in Toronto. Jim started working in Toronto for the Ontario Water Resources Commission in summer of 1965 which included getting his master’s degree at University of Waterloo. In the summer of 1969, he met his wife Elizabeth, and they married in October 1970. First child Katherine was born in February 1972, and the twins Daniel and David came along in November 1973. In February 1973 Jim and family moved to Thunder Bay where he worked in the Thunder Bay office, Ministry of the Environment serving the Northwest region until his retirement in 1996 from the Ontario Clean Water Agency.

After his retirement in 1996, Jim set about to explore the world, visiting 162 countries over a period of 19 years. Jim had many interests outside of work, camping with the children, golfing, skiing (cross country and downhill including many weekend trips to the Rockies), cycling, curling, hockey, his trailer in Grand Marais, MN and the love of this life were his Siberian huskies which he has for 32 years and dog sledding in the winter.
He was a member of Corpus Christi Parish, Third degree Knight and past Grand Knight of the Knights of Columbus, 9295 council.

Jim leaves behind Elizabeth, his wife of 49 years, daughter Katherine, son David (Kristine), grandchildren Fiona, Farrah, Grace and Graham. He was predeceased by his parents and his son Daniel in 2004.

A memorial service will be held at 10:30 a.m. on Friday, November 29, 2019 at Corpus Christi R.C. Church, 684 Red River Road with Rev. Victor DeGagne officiating. Visitation for family and friends will be held one hour prior to the service. In lieu of flowers, donations can be made to the TBRHSC “Our Hearts at Home” campaign or a charity of your choice. Online condolences may be made at www.sargentandson.com.