To share your memory on the wall of Robert Cameron, sign in using one of the following options:

Dad turned 85 years old on November 22, 2019 and without reservation lived a very full and rewarding life. Dad is survived by the love of his life, his wife of 60 years, Olga (Filipovic) and children: Robert (Rhonda), Randal (Maureen), Carolyn (Chris), Stephanie (Gil) and his grandchildren: Braedon, Nolan, Lucas, Colin, Gillian, Cameron, John, Aaron and Bridget. Also survived by his brother and sister-in-laws: Joe and Pat Filipovic, Ab and Martha Filipovic, Dina and Vince Sisko, Shirley Cameron and many special nieces, nephews and cousins including his loving, extended family in Brela, Croatia; a place close to his heart. Dad was predeceased by his parents Robert and Violet Cameron, brother Bruce Cameron, Mother and Father-in-law Danislava and John Filipovic and many beloved aunts, uncles and cousins.

Born and raised in Fort William, Dad grew up in the Cameron family home on Murray Avenue and attended local schools. He enjoyed playing hockey as a youth and later football; playing into his mid 30’s. Dad was a member of the Fort William Redskins Football Club. Memorable moments was playing in 3 consecutive Dominion Intermediate Football Championships; which included a coveted 10-0 win November 23,1958 against St. Francis Xavier in a game played at the old McKellar field. Dad’s association with the Redskin Football Club resulted in life-long cherished friendships with coaches, teammates and their spouses. This group met annually over the span of 50 years. Each year funds were raised as part of the Giving Back campaign, resulting in notable donations being made to local charities and organizations.

As a Construction Electrician and proud member of IBEW Local #402, Dad worked on various projects in most, if not all, of the local grain elevators and pulp mills. For a number of years his work took him to Fort Frances where he supervised various projects. A weekend shut-down would usually result in Mom taking the bus to join him in International Falls for the weekend. A committed and dedicated tradesman, Dad was often sought after for advice from family and friends and was eager to lend a hand, especially when it came to helping his children in their own homes. Dad’s exceptional skills were demonstrated in the family home he built at the age of 25 and the family camp he restored following his retirement. Dad’s gifts were plenty and reflected in his passion for boat building as a young man. His work included a canvas kayak, and later a 17 foot wooden day cruiser that was enjoyed by his family for many years.

The importance of family was always front and centre for Dad and he was always present in the lives of his children and grandchildren. Dad made every effort to cheer on his grandchildren in their respective pursuits. He was a committed volunteer for many years and a long-time member of the Elks Lodge #82, devoting countless hours assisting with the Elks Hockey Association for many years. From a young age his summers were spent at the family camp at Birch Beach where Dad had fond memories of time spent with family and friends. Together with our mother, they raised their children with similar lasting memories at the beach. “Mr. C.”, as Dad was affectionately known to many, served the Birch Beach Assoc. well in leading many projects to ensure the Association continued to thrive.

Whatever Dad set out to do he committed himself fully to the task and would never allow a challenge to stand in his way. Commitment, dedication and a resounding perseverance were deeply ingrained in him, up until the very end. He was guided by his personal faith and was always a man who led by example and was a beacon of strength to those close to him. We are forever grateful for the wonderful and memorable years we have all shared with our Dad and he will be missed immensely.

The family does wish to acknowledge the professionalism and compassion Dad received by each member of his healthcare team. Thank you to Dr. Del Paggio and the exceptional nurses at the Regional Cancer Centre. His end of life journey would not have been possible without the outstanding care provided by Nurse Practitioner Calvin Pelletier and Bayshore Nurses Stephanie Aho & Paula Niittynen. Visitation will be held at Sargent & Son Funeral Home, 21 N. Court Street, Thunder Bay, Thursday, December 12, 2019, 5:00-6:30 pm; prayers will commence immediately following visitation. Funeral Mass will be held at Our Lady of Loretto Church, 290 Grenville Avenue on Friday, December 13, 2019, 11:00 am. In lieu of flowers, donations may be made to the Northern Cancer Research Fund or Our Hearts At Home Campaign, both at Thunder Bay Regional Health Sciences Foundation.
Read Less

We encourage you to share your most beloved memories of Robert here, so that the family and other loved ones can always see it. You can upload cherished photographs, or share your favorite stories, and can even comment on those shared by others.

Posted Dec 09, 2019 at 07:35pm
Mrs.C., Robbie, Rhonda, Carolyn, Chris, Steph, Gil, Randy, Mo and families,
We have been so fortunate to have come to know and love the Cameron's as family. Mr. C. had an amazing gift of being such a gentle spirit with a large presence. He gave his undivided attention to anyone he was speaking to and always took the time to ask how each member of our family was when we gathered for special occasions. He will be forever cherished and remembered for the kind, caring man he was and we consider ourselves blessed to have had many opportunities over the years to be a part of the Cameron's loving extended family. Our hearts are with you all as you face each day in a new way. A great love is a great loss and no matter how many tears are shed over the days ahead, he is deserving of each one. Mr. C. was a fine man of integrity and strong character and those traits will remain in the hearts and memories of all those whose lives he so graciously touched. Love to you all.
Marcie, Bob, Havyn and Jarek Jesperson
Comment Share
Share via:
M

Posted Dec 09, 2019 at 01:30pm
I was very lucky to have grown up just across the street from the Cameron’s. Mr Cameron and Olga ( I can final call Mrs C by her first name as we had worked at the Bank of Montreal together for several years ) are a fixture on our street. He was a gentle giant with a heart of gold. When my father was dying of cancer I remember hearing a knock on the door. It was Mr. C he came to spend time with our father. I remember seeing the tears in his eyes as he sat and talked with my dad. He wasn’t afraid to show his emotions. I will always remember him by his kind warming smile. He was the sweetest man I know. I can see how he had influenced his children to be a reflection of him amd Mrs.C. I am so sorry for the loss of your father and Olga your husband. Know that he has touch many people throughout his life time. Rest In Peace Love Jan Hawkins ( MCCarthy)
Comment Share
Share via:
TF

The Drury family purchased the Medium Dish Garden and planted a memorial tree for the family of Robert Cameron.

Bruce Cameron family purchased flowers and planted a memorial tree for the family of Robert Cameron. 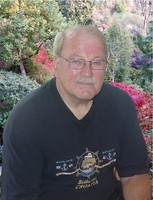