To share your memory on the wall of Roy Stefak, sign in using one of the following options:

With sadness Roy’s family announce his peaceful passing on April 24, 2021 after many years of health concerns.
He was born September 24, 1934 in Bifrost, Manitoba then moved to Port Arthur now Thun... Read More
Roy Stefak
1934 – 2021

With sadness Roy’s family announce his peaceful passing on April 24, 2021 after many years of health concerns.
He was born September 24, 1934 in Bifrost, Manitoba then moved to Port Arthur now Thunder Bay at an early age with his mother Rose. They settled on Water Street where he was able to watch and keep up with city events and growth.

His early schooling began at Central School therefore he was pleased to see it preserved to become part of Magnus Theatre. His interest in sports started with basketball at Port Arthur Tech. As an adult he was involved with 5 pin bowling winning many trophies. In later years he turned to curling where he also excelled. On several occasions he had the pleasure of being host driver for teams participating in bonspiels held locally.

He started his working career in 1954 with Abitibi Thunder Bay Division. While there he worked in several areas learning all aspects of papermaking. In 1973 he joined F.W. Mission Mill as Groundwood Supt. Retiring in 1991. In previous years he drove for Roach’s Taxi. After retirement he continued to enjoy meeting people while driving the courtesy van at Pinewood Ford. He was also a member of the Fort William Masonic Lodge 415.

Getting together with friends at McDonalds most weekday mornings and Sundays were an important start to his day.

He is predeceased by mother Rose Smulski and stepfather Mike Smulski.

Due to these difficult times, as per Roy’s wishes, he will be laid to rest at Riverside Cemetery with family members present for a private graveside service. Those wishing may make a donation to the Charity of your Choice in Roy’s memory. Online condolences may be made at www.sargentandson.com.
Read Less

To plant a memorial tree in honor of Roy Stefak, please visit our Heartfelt Sympathies Store.

Receive notifications about information and event scheduling for Roy

There are no events scheduled. You can still show your support by sending flowers directly to the family, or planting a memorial tree in memory of Roy Stefak.
Plant a Tree

We encourage you to share your most beloved memories of Roy here, so that the family and other loved ones can always see it. You can upload cherished photographs, or share your favorite stories, and can even comment on those shared by others.

3 trees were planted in the memory of Roy Stefak

Posted May 09, 2021 at 11:33am
Joanne, our hearts an prayers are with you and your family. Now I know where the twinkle in your eye comes from. Beautiful picture! God bless you, always. Your dad will be watching over you! 💕🌷
Comment Share
Share via:
SB

Posted May 02, 2021 at 06:09pm
Dear Marg, Doug, Debbie, Joanne and families,
I just heard the sad news from Margie Grant. I’m so sorry for your heartbreak: It’s so hard to lose a loved one.
I have so many fond memories of growing up as neighbours across the street on Crescent Avenue. I remember Roy as being a happy, enthusiastic and friendly fellow , just full of energy - always running - no matter where he was going, whether it be from one job to another or to his bowling league. What great neighbours you all were.
I also remember the tour of the mill Roy gave Denis and I when we visited Thunder Bay the year after we were married, and how he and Denis had to peel my fingers from the railing of the catwalk going over a giant vat of pulp(: My fear of heights made me freeze halfway across the bridge(:
Roy was a man always willing to lend a helping hand and a big smile to his fellow man. The world could use more like him.
My thoughts are with you all as you come together to mourn your dear husband, father, grandfather and great grandfather.
With love from,
Susan Bouchat, Denis and Genevieve

Posted Apr 29, 2021 at 01:40pm
Roy always added some " character " to the sometimes dull workplace at Mission. He mixed well with his mates while performing his role as groundwood superintendent in a productive manner. He is missed but certainly not forgotten. Condolences to Marg.

Posted Apr 29, 2021 at 11:18am
Debbie and Rick, so very sorry to hear of your loss. May you find solace within your family during this Pandemic and share lifetime memories. Thinking of you. Pam Farrell
Comment Share
Share via: 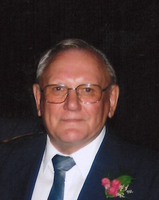