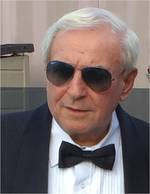 It is with great sadness that the family of William Peterson announce the passing of Bill on February 6, 2020 in the Thunder Bay Regional Health Sciences Centre. He was predeceased by his mother Ellen in 1997 and his brother Jim in 2012. Bill was born in Sault Ste. Marie and spent his early years in Armstrong until the family moved to Thunder Bay. He was employed at Manitoba Pool 1 until his retirement in 2000. Bill enjoyed his camp at Warnica Lake, hunting, fishing, trap shooting, driving his Corvettes, traveling and wintering in Florida. He particularly loved his music and playing his many guitars. He will be missed by his wife Lois Hutchinson, son Shane, Shane’s mother Joy, Cousin Tracey Picton and his many friends both in Thunder Bay and Port Charlotte, Florida. The family wish to thank the staff on 2A for their care and Dr.s Johnsen, Noy, Capello, Migay and Cooper. A private interment and celebration of life will be held at a later date. Online condolences may be made at www.sargentandson.com.