To share your memory on the wall of John Wright, sign in using one of the following options:

Provide comfort for the family by sending flowers or planting a tree in memory of John Wright.

Provide comfort for the family of John Wright with a meaningful gesture of sympathy.

Canon, The Honourable John de Pencier Wright, retired judge of the Superior Court of Ontario, died of cancer at home, surrounded by his family, in Thunder Bay on June 30th, 2020. He is survived by his loving wife, Elaine P... Read More
J. deP Wright

The son of Archbishop William L. Wright and Margaret Clare Wright, John grew up in Sault Ste. Marie, Ontario. He attended the University of Western Ontario where he was awarded the Huron University College Gold Medal upon graduation in 1962. After taking his Law degree at Osgoode Hall and reading law for a year with the Toronto firm of Fraser & Beatty, he was called to the Bar in 1967 following which he practised law in Sault Ste. Marie with the Wishart firm. He was appointed Queen’s Counsel in 1978. In 1985 he was appointed to the District Court of Ontario in Thunder Bay.

John believed in serving “Altar, Sword and Pen”. He served his church in multiple roles, including teaching Sunday School and serving on numerous committees. He was elected Registrar of the Anglican Diocese of Algoma for 2 years, was Chancellor for 6 years, and was a member of the Corporation of Trinity College for 10 years. When the Supreme Court of the Anglican Church of Canada was convened for the first time in the history of that church, John served as a Judge. John also served his community as a board member (and President) of the Algoma District Children’s Aid Society, as Vice-Chairman of what is now known as the Social Assistance Review Board and as Chairman of the Day Nurseries Review Board. Notably, John was very proud to be a registered adult member of the Boy Scouts of Canada for 30 years, finishing as a Vice-President of the Provincial Council.

John held the rank of Captain in the Canadian Forces (Reserve). He was an honourary member of the 49th Field Regiment RCA and served on that Senate. He also served on the Senate of the Lake Superior Scottish Regiment and served as Honourary Colonel of that Regiment. John authored over 200 newspaper articles on law for the layman, over 70 other articles, what was then the leading text on the Division of Matrimonial Property in Ontario and he compiled a manual for the Operation of the Diocesan Court. He wrote a number of books on his family’s history.

The family would like to express their heartfelt gratitude to the tireless and patient medical professionals for their care. Special thanks go to Gabriella Belda, Dr. Delpaggio, Melissa, and Dr. Kennedy.

Due to COVID restrictions a private funeral will be held at St. Michael’s and All Angels Anglican Church in Thunder Bay, Monday July 6th, 2020.

Anyone wishing to make a donation is invited to donate to a charity of his/her choice.

Receive notifications about information and event scheduling for John 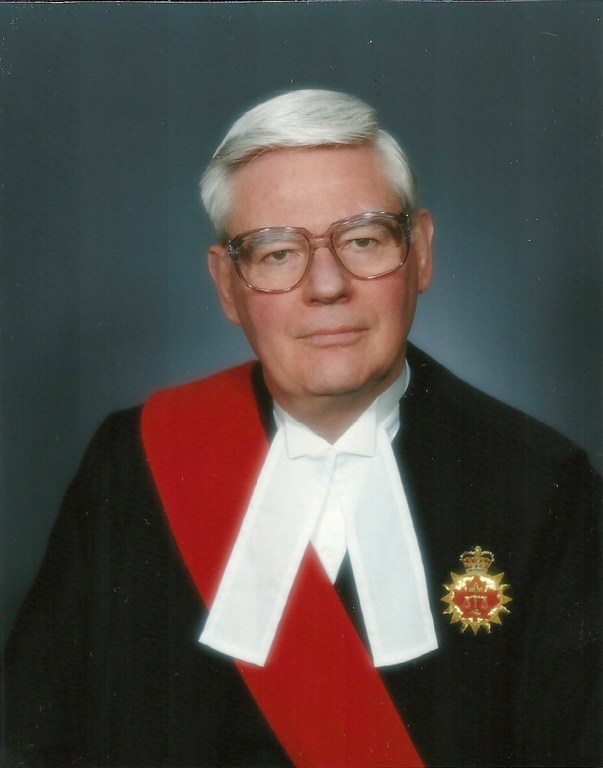 Honor the life of John de Pencier Wright by planting a memorial tree.
Plant a Tree in Memory of John
Planted in the area of greatest need
MG

Please accept our most heartfelt sympathies for your loss... Our thoughts are with you and your family during this difficult time.

Knowing you was a gift and working with you a blessing. Kind thoughts and caring to Elaine and family.

My thoughts and prayers are with John Wright's family and friends especially to Rebecca Wright who was my classmate and close friend at Glendon College many years ago! Take Good Care and God Bless!
Comment | Share Posted Oct 30, 2020 at 05:37pm via Condolence
SK

Dear Elaine and family,
I am very sorry to hear of John's passing. He was a wonderful man, great friend to my father and will be missed. Thinking of you during this difficult time.

Willie and I are saddened to hear of John's passing. He and Elaine were great friends of my parents Florence and Arthur while they were in Sault Ste Marie. John was very good to my girlfriends and I when we were in Toronto in 1966. Thinking of you at at this time.
Clare and Willie Algajer and family. Edmonton Alberta.
Comment | Share Posted Jul 08, 2020 at 07:01pm via Condolence