To share your memory on the wall of Theresa Jefferson, sign in using one of the following options:

Print
With profound sadness and broken hearts, we mourn the passing of Theresa (Therese) Jefferson, loving wife, mother, grandmother, great grandmother and friend who passed away at the age of 78 on Thursday, September 26, 2019

Theresa was bor... Read More
With profound sadness and broken hearts, we mourn the passing of Theresa (Therese) Jefferson, loving wife, mother, grandmother, great grandmother and friend who passed away at the age of 78 on Thursday, September 26, 2019

Theresa was born in Rapide Danseur, Quebec on October 3, 1940. She moved to Terrace Bay at the age of 12 with her parents Louis and Irene Jolin, and sisters Lucille and Anita. Her younger sister Irene joined the family after they moved to Ontario.

She loved her pets. There were so many fur babies during her lifetime, but she left behind her most treasured furry companions Gizmo, Bella and Mya who will miss her so much.

Theresa’s passion in life was painting. She was an accomplished artist who captured the landscape beauty of the surrounding area and painted the animals of our forests. She would often joke when painting animals into the sceneries, that they were often painted in and out until she got it just right. Theresa inspired her husband Paul to paint and her daughters Cynthia and Linda, as well as friends. If you had the chance to spend any time in her art studio you would know that there was no time limit in the studio and the creativity often went into the wee hours of the night, as she always claimed to be a night owl. Her paintings were sold and gifted to friends and family throughout Canada and the U.S.

Theresa held special love for Lisa Jacques and Catherine St. Louis whom she considered her daughters and part of her brood. The ‘Campbell Girls’ were also so loved by Theresa since she shared such a special bond and sisterhood with their mother Brenda. Theresa was passionate about giving to others and we know she sacrificed at times to make sure that wishes and dreams were fulfilled. To her friends and family, she gave everything she had and more. She was always someone you could count on to be in your corner. To her dying breath she joked how “we needed to listen to her” and she would “always have the last word”.

Theresa’s love for her family was immeasurable. There was no limit to her love for those closest to her in her life. If you were fortunate to have this women’s love you were truly rich. She put others before herself and took care of everyone and she proved that to the end of her days. She said that we needed to take care of each other and love without conditions and to show each other care and compassion. Beyond our tears in her last days there was laughter. She loved a good laugh and knew how to have fun. That’s why so many people wanted to be close to her. If she was your friend, it was for life.

We will miss her beyond words, but we know that she is in a far better place and when it is our time that she will be there to greet us. She always thought she was the lucky one, but we know that we are the ones that were truly blessed to have this amazing woman in our lives. The family is forever grateful for the compassionate care she received by the doctors and nursing staff of McCausland Hospital in Terrace Bay.

Cremation will take place and a celebration of her life will be held on a later date for the family. Donations in her memory to Muscular Dystrophy Canada in her memory would be appreciated in lieu of flowers.
Read Less

To plant a memorial tree in honor of Theresa Jefferson, please visit our Heartfelt Sympathies Store.

There are no events scheduled. You can still show your support by sending flowers directly to the family, or planting a memorial tree in memory of Theresa Jefferson.
Plant a Tree

We encourage you to share your most beloved memories of Theresa here, so that the family and other loved ones can always see it. You can upload cherished photographs, or share your favorite stories, and can even comment on those shared by others.

Margaret Jean purchased flowers for the family of Theresa Jefferson.

Posted Sep 27, 2019 at 03:12pm
Michele, Rene & Family and all Theresa’s family
We are so sorry for your loss and hope that your many memories will brighten your days by bringing you smiles and laughter. Thinking of you...
Gord & Judy
Comment Share
Share via: 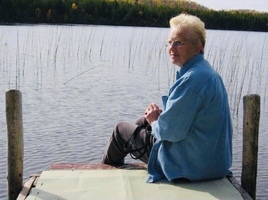